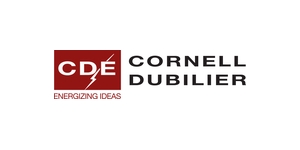 - Cornell Dubilier is the source for capacitors that transform your applications to success stories. It excels with aluminum electrolytic, mica, motor run and AC and DC plastic film capacitors. Cornell Dubilier only makes capacitors and has been doing it for almost 100 years. The world leaders in welders, UPS systems, motors, drives, avionics, power and military electronics and medical lasers are prominently among its more than 33,000 customers.