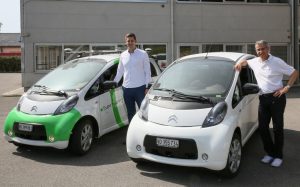 Its researchers developed ‘co-operative perception algorithms’, which extend a vehicle’s situational awareness through data from a second car.

“For example, in a scenario in which one car overtakes another car on a two-lane road, they developed an assistance system that assesses the risk of the overtaking manoeuvre,” said EPFL. “The risk assessment factors-in the probability of an oncoming car in the opposite lane as well as kinematic conditions such as driving speeds, the distance required to overtake and the distance to the oncoming car.”

At first, the team used a simulator to test their algorithms under various scenarios, both with and without cooperative vehicles nearby, then they moved on to live testing between two Citroen C-Zero electric cars, each fitted with lidar, a Mobileye camera, a Wi-Fi link and a computer.

“These were not autonomous vehicles, but we made them intelligent using off-the-shelf equipment,” said researcher Alcherio Martinoli.

Success did not come easily, said EPFL, with poor relative position information causing difficulties in fusing data from the two vehicles: “If a single pedestrian does not appear to both cars to be in the same exact spot, there is a risk that, together, they will see two figures instead of one,” it said.

To get over this, inter-vehicle position accuracy was boosted in real-time using lidar and camera data. “Because of this, the project also helped improve the accuracy of localisation more generally,” said Vasic.

There is a video.

Outside the technology, questions remain, said the university; “To begin with, there is the issue of liability in the case of an accident. Determining liability – which already involves the owner, car manufacturer and software designer or supplier – becomes even more complicated when vehicles co-operate.”

“The answers to these issues will play a key role in determining whether autonomous vehicles are accepted,” said Martinoli.